TrendMD visitors are twice as engaged as readers from PubMed and Google Scholar, three times more engaged than Twitter referrals. 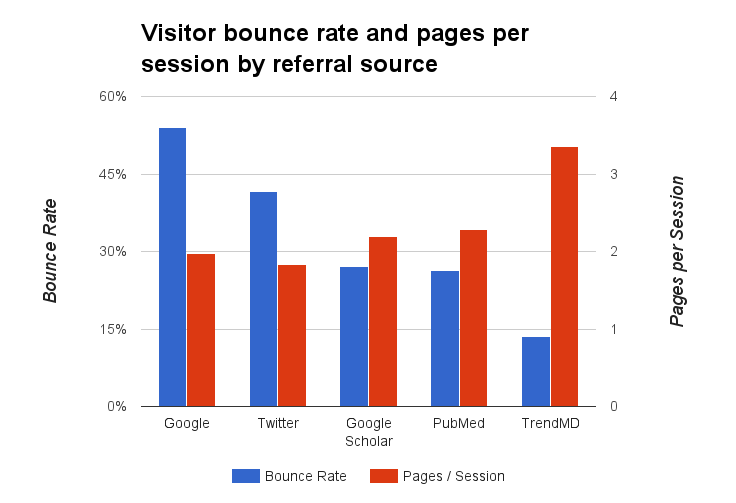 Engagement with a site can be measured by bounce rate and pages viewed per session. Bounce rates refer to the proportion of visitors who only look at one page on a given site, while pages viewed per session refers to the number of pages a visitor will look at on average before navigating to a different site. In both respects, TrendMD sent significantly more engaged visitors to JMIR than Google Scholar, PubMed, Twitter, or Google.

How much more engaged are readers referred by TrendMD? In addition to much lower bounce rates (13% compared to 26% and above) readers directed to JMIR via TrendMD viewed 150% more pages per visit than any other source. This is 150% more content on a publisher’s site is discovered when the reader is referred by TrendMD.

Engaged readers mean more of your content is being discovered on every visit but also increases the probability of readers coming back and continuing to explore later. If you're interested in finding out more about how TrendMD can increase your reader engagement, email us!

I consent to the use of Google Analytics and related cookies across the TrendMD network (widget, website, blog). Learn more